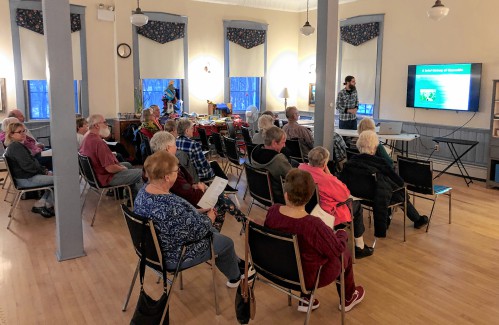 BERNARDSTON — Seniors learned about CBD and its potential applications as part of the Council on Aging’s “Demystifying CBD” educational workshop last week.

“CBD is a hot topic right now, but the right information can be hard to come by,” Abrams said.

CBD stands for cannabidiol. It is the second most prevalent active ingredient in marijuana. CBD is an essential component of medical marijuana, and it is derived directly from the hemp plant, a cousin of the marijuana plant.

“Hemp can be traced back to somewhere in the Middle East,” Abrams said. “It was carried to all continents by the hand of man through the trade system.”

Hemp was originally made illegal in the United States in 1938. Agricultural hemp was allowed on an experimental basis by federal law under the Agricultural Act of 2014. Under the 2018 United States farm bill, commodity hemp production was federally legalized.

Abrams recognized hesitation around use of CBD, as it is often associated with THC, the psychoactive compound in marijuana plants. CBD, Abrams said, is a non-psychoactive substance that promotes relaxation.

“CBD can help with degenerative conditions and addictive behaviors, or treat anxiety and pain,” he said.

That stigma is quickly fading, Abrams said, as more states legalize marijuana, both medically and recreationally. This has led to further research on both THC and CBD, and their applications.

Abrams said that, legally, the greatest distinction between marijuana and hemp is their THC levels. Marijuana has a THC level above 0.3 percent, while hemp has less.

The use of CBD can help ease activity in the brain by regulating the flow of brain chemicals, helping calm anxiety, Abrams said. CBD can also help as an anti-inflammatory or with gastrointestinal problems and stomach discomfort, which Abrams said he personally uses it for.

“It’s possible CBD won’t have the same effect on everyone,” he noted.

Abrams said anyone who is considering using CBD or THC should have a conversation with their doctor. He recommended that anyone using CBD start “low and slow,” using a 10 milligram dosage. Methods of use include dermal application of a cream or oil. Dermal application, Abrams said, can help with arthritis and muscle pain.

CBD gummies, Abrams noted, are one of the most popular products.

“While edibles take longer to take effect, they have a higher rate of absorption,” he said.

Other methods of use include: CBD patches placed on targeted areas of the body; tinctures held under the tongue and absorbed through the salivary glands; and inhalation through smoking or vaping.

Inhalation, Abrams said, is often the fastest-acting method. Because of this, it is often used to treat migraines, seizures or other debilitating symptoms. Ultimately, he said the method of use is dependent on the intended use as much as an individual person’s preference.

According to Abrams, a 2016 study of CBD was conducted by the World Health Organization after it was discovered Olympic athletes were using it. The study proved that CBD has no addictive properties, he said.

Legalization also allows access to retail marijuana locations as quality sources for regulated products. He said studies of unreliable CBD products sold at convenience stores and other less than reputable locations had no CBD in them at all.

“These companies were deceiving people,” he said.

According to Abrams, Heritage Hemp aims for a high level of transparency with its products, and uses third party testing for regulation. Meanwhile, the state Cannabis Control Commission tracks inventory from “seed to sale.”