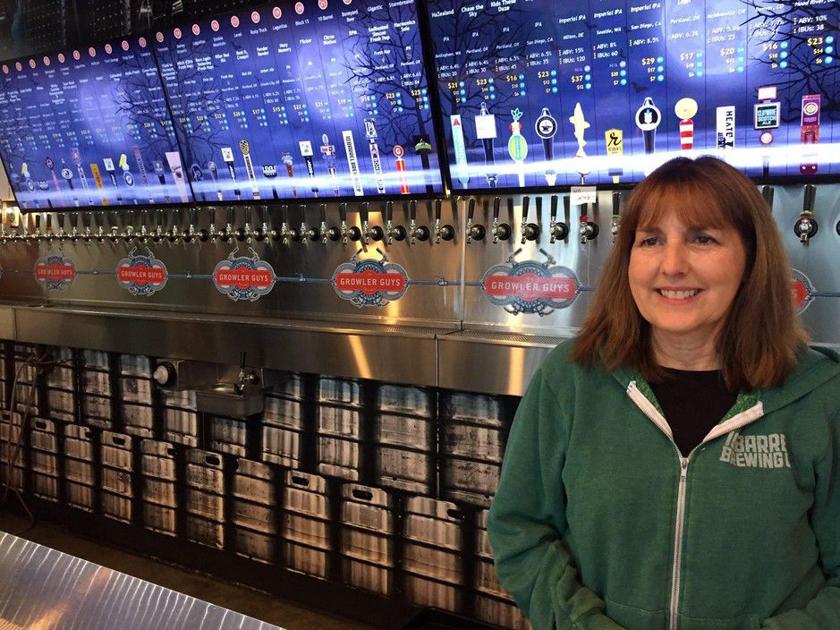 SALEM — The Oregon Liquor Control Commission passed a ban Thursday on manufacturing and selling alcohol that’s been mixed with CBD, an inactive ingredient of cannabis, but one that has medicinal qualities.

The Growler Guys in South Portland has 40 different beers on tap, said Sue Wise. She orders them and said her customers aren’t going to appreciate the OLCC ban on infusing alcohol with cannabidiol — the non-psychoactive ingredient in cannabis, often shorthanded to CBD.

“People feel like the CBD in the beer is helpful, whether it’s for muscle pain or other injuries they have. People really believe the CBD helps them,” said Wise.

Customers still have options. The ban doesn’t apply to drinks that aren’t alcoholic and Growler Guys has four taps of CBD-infused soft drinks.

So, does Wise think customers will be OK getting their CBD from something other than alcohol?

“They may,” she said. “But they still prefer the beer.”

Up to now, Oregon has been relatively permissive in its approach to CBD consumption. In 2015 the state legislature said hemp and marijuana could legally be added to foods.

Sunny Summers, the cannabis policy coordinator with the Oregon Department of Agriculture, said since then CBD’s been added to all kinds of things.

“People are adding it to a shot to coffee or smoothies for example. I’ve seen donuts that have it. Gummies. Gum … I’ve seen sodas with CBD in it. Pretty much, if you can imagine it people are likely looking at it or have done it,” said Summers.

Several Oregon brewers jumped on the CBD trend and introduced beers containing the cannabis chemical that people use for a range of medicinal purposes.

But alcohol is different from food and falls squarely under the purview of the Oregon Liquor Control Commission. The executive director, Steve Marks, said those beers are not technically legal.

“Both federal government and (the state) should be enforcing against that,” said Marks.

To some degree, Marks is following in the footsteps of the U.S. Food and Drug Administration. In November, it said it doesn’t consider CBD safe for use in food because research is so limited.

Marks said the OLCC’s ban is needed for three main reasons. First, companies aren’t sufficiently testing CBD to see how much is being mixed into drinks. Second, he’s worried some of the psychoactive ingredients of marijuana are being included in products.

“And the third thing is CBD themselves, while they’re greatly purported for their health effects, there is a lot of concern about particularly the effect of high quantities of CBD on the liver, which is also affected by alcohol,” said Marks.

Researchers at the University of Arkansas recently looked into the toxicity of CBD in mice and found an elevated risk of liver injury.

Over the last few years, all kinds of health claims have been made by those selling CBD-infused products — from lotions promising pain relief to tinctures for anxiety.

Marks said for people who use CBD medicinally, they’ll still be able to buy their creams and soft drinks.

The ban goes into effect almost immediately, on Jan. 1.

The OLCC will be educating licensees in January and then cracking down in February.

Some Oregon brewers have tried to get around a patchwork of rules and limits that preceded the OLCC’s new ban by obtaining CBD from sources other than cannabis, such as bark, lichen, yeast and citrus fruits. But the OLCC’s new rule says all CBDs are banned, wherever they come from.

Deschutes Brewery in Bend developed a CBD-infused beer about a year ago. But it was unable to get the recipe accepted by the FDA — a step all brewers are supposed to follow.

Instead, the company ran an ad campaign to let those who enjoy cannabis know that they can enjoy a beer, too.

Meanwhile, there is still a legal way to get CBD mixed with alcohol without running afoul of the ban: you can order a CBD cocktail, where the CBD is added at the bar.

OLCC chief Steve Marks is well aware of the loophole and said the agency is working on a ban against that too.

“We’re considering just outright saying that it’s an adulterant for alcohol so you wouldn’t just be able to mix the cocktails,” said Marks.

That rule was initialized Thursday but is expected to take about four months before being adopted.