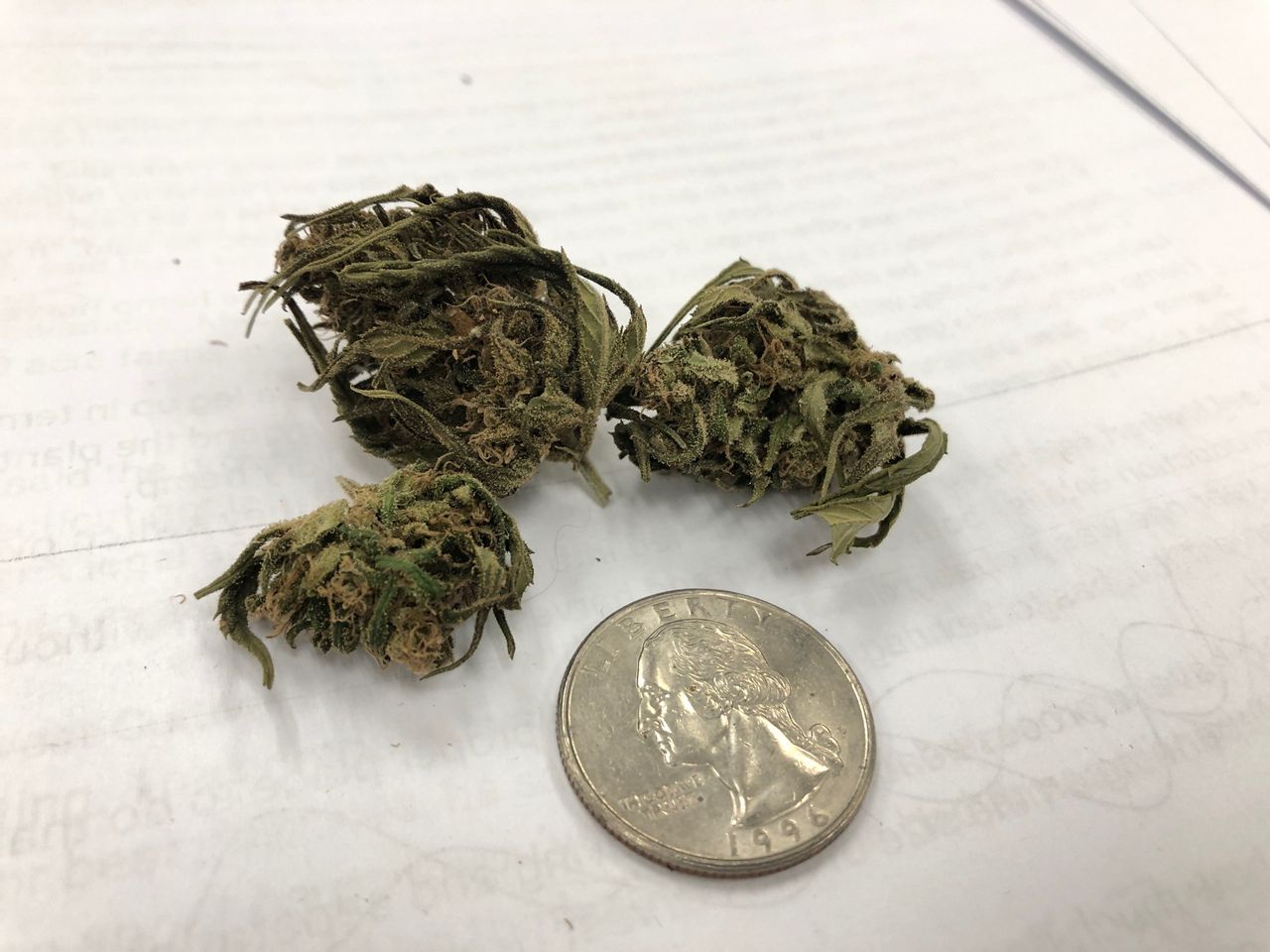 HATFIELD — The century-old tobacco barn on the Herbert farm on Depot Road looks like dozens of others around town, but it’s what is inside that makes it different.

Hanging on racks from one end of the barn to the other and three levels high is the output of the Herbert family’s first foray into the cultivation of hemp.

“Holy smokes!” exclaimed Christopher Verni while walking into the barn for the first time.

Verni, chief operations officer with Northwest Cultivation, a Connecticut hemp nursery that worked with the Herberts, was clearly impressed with their first crop.

“There is a lot of product here,” he said.

Michael A. Herbert, who with his father, Stephen J. Herbert, make up the father-son team behind Urban Grown Inc. of Hadley, said their first time growing hemp went pretty well, and they expect to turn a modest profit from it.

“This was a big season,” he said. “It definitely was a very good season.”

He said the Pioneer Valley, because of its soil, climate and abundance of old tobacco barns, may be richly suited for continued hemp production.

“The soil is very good for it,” he said.

Hemp looks like and kind of smells like marijuana, so much so that the two are often confused. Hemp and marijuana are cousins in the cannabis sativa family, but there the similarities pretty much end.

Marijuana is packed with THC, the chemical that causes people to get high when it is smoked or ingested.

Hemp has very little THC, but its flowers are packed with cannabidiol or CBD, the oil used in any number of products and medications for anything from pain relief to treatment of anxiety, depression, Parkinson’s disease and insomnia.

Hemp, like marijuana, had been illegal to grow anywhere in Massachusetts for decades. It was legalized in 2016 when voters approved a referendum that legalized marijuana. The state drafted regulations governing the production of hemp and issued its first licenses in 2018.

That was the same year the federal government in the 2018 Farm Bill ended a ban on hemp production, opening the door for it to be grown nationwide.

According to the Massachusetts Department of Agricultural Resources, there were 59 licensed hemp growers in 2019. There were also 14 licenses for processors, and 50 dual licenses for operations that grow and process their own crop.

In the four Western Massachusetts counties, there are 12 growing licenses in Hampshire County, seven in Franklin, six in Hampden, and three in Berkshire.

The 12 growing licenses in Hampshire is tops in the state, ahead of Worcester County with 11.

Hampshire and Worcester counties are tied with the total number of licenses for growers, processors and dual permits at 19.

That number could increase if Massachusetts would revise its laws to allow hemp to be grown on agricultural land under Chapter 61A. That’s the state law that preserves farmland by setting a lower property tax rate on land reserved for agricultural or horticultural uses. Because hemp is not listed as a Chapter 61A eligible crop, farmers who grow it run the risk of losing the property tax benefit.

The Massachusetts House has approved revising 61A to allow hemp, but so far the bill has not been approved by the Senate.

Mic LeBel, director of farmer partnerships with Heritage Hemp CBD in Northampton, said this has been the first real year working with local farmers and it has been a learning experience for both.

Heritage Hemp partners with 13 farms throughout New England in the production of hemp. The company extracts CBD oil and uses it in various products, including gummy drops, topical ointments and extract oils.

LeBel said the relationship with the farmers begins before the plants are in the ground.

“We have to make sure you have good seeds,” he said.

Heritage Hemp uses proprietary seeds licensed with the Department of Agriculture that have the right genetic qualities to produce large amounts of CBD oil while containing less than 0.3% THC.

The company has experts on staff who can work with farmers on every step in the process from planting to irrigation and pest control to harvesting, drying and processing.

LeBel said there likely will be growth in Massachusetts hemp production. Demand for CBD products is strong. But realistically, Massachusetts will always be playing catch-up to the 1,000-acre hemp farms in Montana and 5,000-acre farms in Colorado.

Meanwhile, Connecticut got into the hemp game in June, a year after Massachusetts.

The Herberts say their first hemp crop, grown on a 5-acre plot, came in surprisingly well despite a late start. They did not plant until June, but by October they were harvesting and hanging it up to dry.

While hemp is relatively easy to grow and harvest, processing it can be time-consuming, tedious and labor-intensive, Stephen Herbert said. It takes around six weeks in the right conditions to dry it out properly, which is why having a tobacco barn is a necessity.

After it is dried, each of the stalks has to be trimmed by hand. That means removing the flowers and the leaves from the stalks and stems. Practically all of the hemp plant is usable, so all the flowers, leaves, stalks and stems are sorted into separate containers to be sent out for shipment.

In a visit to the property in late December, a crew of three were seen de-leafing the stalks by hand and putting the leaves and flowers in large plastic bags. The amount that had been processed so far seemed to be a small fraction of what was still hanging in the barn.

The operation has some mechanized shearing equipment, two pieces that cost a combined $17,000, to separate stems from leaves, but each has to be manually operated.

“Most of the farmers don’t have that equipment,” Stephen Herbert said. “We put money into that, so we have to get a little bit of money back.”

LeBel and Verni each said one of the biggest challenges hemp farmers face is the amount of work needed to bring it to market.

“It’s very labor-intensive on the back end, more than just farming,” Verni said.

LeBel said there are mechanical systems, like with the Herberts’ operation, but doing the work manually seems to be the best.

“A lot of people getting into it to don’t realize the amount of work,” he said. “If you plant 20 acres, that is a lot of labor.”

And if the farm has other crops in the ground in addition to hemp, a farm may find itself with too much work and not enough people to do it all, he said.

“The logistics can be challenging,” he said.

Hemp has another idiosyncrasy that growers need to be aware of, Michael Herbert said. Hemp plants have two genders, male and female. The female plants flower and grow into maturity after pollination, while the males die out. It’s critical to find and remove all the male plants before pollination to ensure the females produce larger, more CBD-rich flowers, he said.

“A lot of people didn’t realize that would be an issue,” he said.

The rush of new growers bringing product to market has led to fluctuation in hemp prices. According to the New Leaf Data Services, the U.S. wholesale price for flowered hemp was $364 per pound in September. That’s a 14% decline from August, when the wholesale price was $414 per pound.

Because hemp is nearly 100% reusable, even the stalks and stems can be sold as hemp biomass and used in the production of paper, textiles and even in the mixing of concrete. As of September, hemp biomass was selling for around $3.07 per pound.

Fluctuations or not, hemp prices are clearly higher than other staple crops. The U.S. Department of Agriculture says that, as of December, the going rate for butternut squash was 90 cents per pound. Sweet corn was around 67 cents.

Hemp is clearly a lucrative crop for farmers, but not as lucrative as legally grown marijuana, which is going for $1,645 per pound, according to Cannabis Benchmarks. But Massachusetts has much more restrictive policies when it comes to marijuana cultivation. Licenses are much harder to get, and Massachusetts sets a canopy limit at 100,000 square feet, which is about 2⅓ acres. There’s no limit on the size of hemp farms.

“It’s the same amount of time and energy, and your cost is the same,” Verni said of growing hemp and marijuana. “But you’re getting $2,000 a pound for THC cannabis vs. $500 a pound for CBD. “

The Herberts got into hemp as an afterthought. They had been given a conditional permit by the state Cannabis Control Commission to grow on 10,000 square feet, or around a quarter acre, of marijuana.

The commission approved their plans for four greenhouses with ventilation systems and odor controls on the Hatfield property. There would be a chain-link perimeter fence and surveillance cameras to keep out thieves.

This was all approved by the commission contingent upon local approval. And the locals did not approve.

At a hearing in June, more than 50 residents attended a Planning Board hearing on the proposal, and many spoke out against it. Opponents cited the impact on the neighborhood, on property values and on the local wildlife.

The Herberts decided to shelve the marijuana farm and grow hemp instead. Hemp still needs to be licensed by the state, but the application process with the Massachusetts Department of Agricultural Resources is nowhere near as stringent as getting approval from the Cannabis Control Commission, he said.

Instead of 10,000 square feet in greenhouses, they could plant 5 acres in open fields. Instead of fences and security cameras, they needed only to put up signs every 50 feet or so identifying the crop as hemp.

“When we planted it, we got an email saying ‘what the heck are you doing?’ from the Planning Board,” Michael Herbert said.

Planning Board approval was needed for the greenhouses, but not for planting in an open field.

Once the plants were in the ground and had sprouted to between 8 and 12 inches, neighbors complained to the Board of Health about the smell stinking up the neighborhood, Stephen Herbert said.

“The Board of Health chair came by and the police came by,” he said. “And they said, ‘We don’t smell a thing.’”

Michael Herbert said when the plants are grown and flowering, it does have a rather pungent aroma, especially after a rain. “But I don’t think it’s a noxious odor. I don’t think it’s like cow manure or cabbages rotting in a field,” he said.

But aware of the smell and people’s perceptions, Herbert said that when he was planning a bonfire in his field to destroy some plants damaged by mold, the first thing he did was to let the police chief know in advance.