Have you ever tried to cut sugar out of your diet?

It’s almost impossible. The stuff is in everything.

In fact, the average American consumes roughly 15 teaspoons of added sugar per day — and often without even realizing it.

In addition to things you already know about, pickles, pasta, salsa, beer, granola, baked beans, and tomato sauce all have added sugar.

Well, that’s what marijuana is going to be like.

Pretty soon, some form of pot — whether it be cannabis or CBD oil — is going to be in almost everything you consume.

And that’s why major food and beverage companies are rushing to take huge stakes in marijuana companies.

Predictably, beer companies have been the first to dive in. Constellation Brands, which makes Corona beer, has taken a $4.2 billion stake in Canopy Growth. Those two companies are now developing an array of non-alcoholic, cannabis-based drinks. 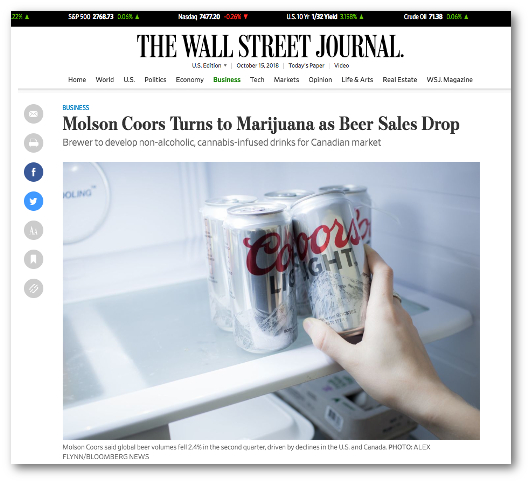 Molson Coors has a joint venture with cannabis producer The Hydropothecary Corporation, that aims to do the exact same thing.

Adolphus Busch V, one of the heirs to the massive Anheuser-Busch fortune, is launching his own pot company.

Again, this makes sense, since alcohol will be the first industry marijuana undermines. But it won’t be the last.

And that’s why Coca-Cola and Pepsi are exploring cannabis options of their own. 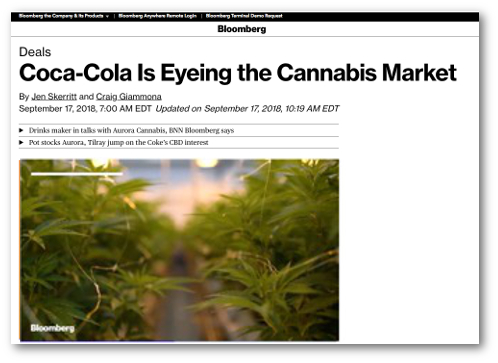 No doubt, soda companies have been coping with sales declines as consumers turn to healthier alternatives.

CBD oil, which has known health benefits, could help there.

After reports surfaced it was eyeing the cannabis-infused drink market last year, Coke admitted it was “closely watching the growth of non-psychoactive CBD as an ingredient in functional wellness beverages.”

This wouldn’t be entirely new territory for Coca-Cola, either. The drink, named for the coca leaf, once contained roughly nine milligrams of cocaine per glass.

Pepsi is doing the same thing.

“I think we'll look at it critically, but I'm not prepared to share any plans that we may have in the space right now,” Chief Financial Officer Hugh Johnston told CNBC.

They’ll need to move fast, if they’re going to stave off challengers.

Recess, a CBD-infused sparkling water company, is already out there competing with Perrier and La Croix.

Another company, Dirty Lemon, combines fruit juices with CBD to produce a “mild euphoria.” Its first production run of 12,000 bottles sold out in just two days.

Like I said, marijuana is the new sugar. And that means candy companies need to watch out, too, because there’s a wide range of edibles ready to share shelf space with Hershey, Reese's, and Snickers in the checkout aisle of your local grocery store.

But unlike sugar, these marijuana and CBD-infused products will also go in facial creams and body lotions. Such products are already being endorsed by the likes of Kathy Ireland and Meryl Streep.

This is why the North American cannabis industry is set to grow from $9.2 billion today to a massive $47.3 billion in the years ahead.

I’m sure joints and bongs will always have their place, but marijuana isn’t going to generate its biggest profits from smokers. It’s going to be people who use discreet, unintrusive products.

And that’s why marijuana investing expert Jimmy Mengel, editor of The Marijuana Manifesto and The Crow’s Nest, released his latest report — “Buyout Frenzy: The 5 Small Cannabis Stocks That Could Make You 1,000% in the Weeks Ahead.”

These companies are in for the same kind of cash infusion that Canopy got from Constellation Brands.

You can check that out here.

Jason Simpkins is Assistant Managing Editor of the Outsider Club and Investment Director of The Wealth Warrior, a financial advisory focused on security companies and defense contractors. For more on Jason, check out his editor's page.

You'll Never Be On the Inside!

So, join Outsider Club today for FREE! You'll learn how to take control of your finances, manage your own investments, and beat “the system” on your own terms. Become a member today, and get our latest FREE report: “Three Big Profit Opportunities in Solar”!

After getting your report, you’ll begin receiving the Outsider Club e-Letter, delivered to your inbox daily.