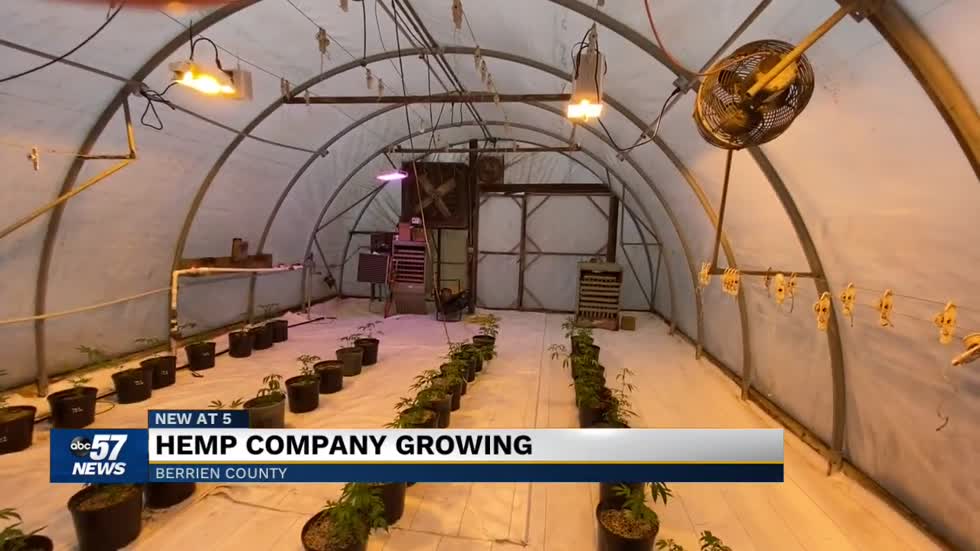 EAU CLAIRE, Mich. — The budding legal cannabis industry is taking root in Southwest Michigan.  Industrial hemp was just legalized and more local farmers are starting to count on it to grow their profits.

In fact, just off Main Street in Eau Claire you can find what may be the future of the small family-owned farm.

“We started farming back in 1835 when Michigan was still a territory,” Ryan Piedt said.

Piedt is a sixth generation farmer who admits his family’s 400 acre apple, summer squash and watermelon farm could have gone extinct like too many others have in the past few years dealing with market forces beyond their control.

“We have been struggling the past several years with market prices with our current commodities so we decided to diversify and try hemp,” Piedt said.

So he and two friends, who all graduated together from Berrien Springs High School, started the BC Hemp Company.

They even cut down some old apple trees to clear land for their new cash crop.

They're growing high quality hemp, not real marijuana that gets you high. It's then pressed into CBD oil and used in other products designed to ease aching joints. They just opened their own small retail store in downtown Eau Claire with balms, tinctures, massage oils even dog treats.

“A lot of people have dogs with arthritis a lot of the ailments it helps humans for also helps dogs as well anxiety, blood pressure problems,” said Joel Mbangu, the company’s chief financial officer.

He says BC Hemp’s main focus is the quality and purity of their products.

Wearing a jacket made of mostly hemp, CEO Jeremy Dybdahl gave ABC57 a tour of their indoor grow operation.

They're raising hemp plant clones inside a heated greenhouse that used to house tomatoes. They also had to install security cameras because thieves hit them 3 times last year thinking the hemp was real pot.

“It looks like a marijuana plant, it is cannabis, but it doesn’t get you high,” Dybdahl said.

And that difference is very strictly regulated.

In fact, if the hemp plants wind up containing more than 0.3% THC, the active ingredient in marijuana, they're legally classified as pot and have to be destroyed according to state and federal law.

“It does have its challenges with THC content and being compliant,” Piedt said.

The U.S. Department of Agriculture is now proposing new strict regulations that would require testing for THC and harvesting hemp plants within 15 days of those tests because the longer the plant grows the more THC it contains.

Some larger farms fear that rule could eliminate 20% of all hemp crops nationwide but Piedt says BC Hemp is planting in stages to stagger harvesting times and avoid those problems.

They're also selling cloned plants and seeds to other farmers in Michigan, Indiana, Illinois, Ohio and Wisconsin and consulting those farms on best practices.

When asked if he’s becoming  the “Johnny Appleseed” of hemp in the Midwest, Piedt agrees.

He said the room for future growth in the industry is unlimited.

“I think potentially it will compete with corn and soybeans on a large scale,” Piedt said.