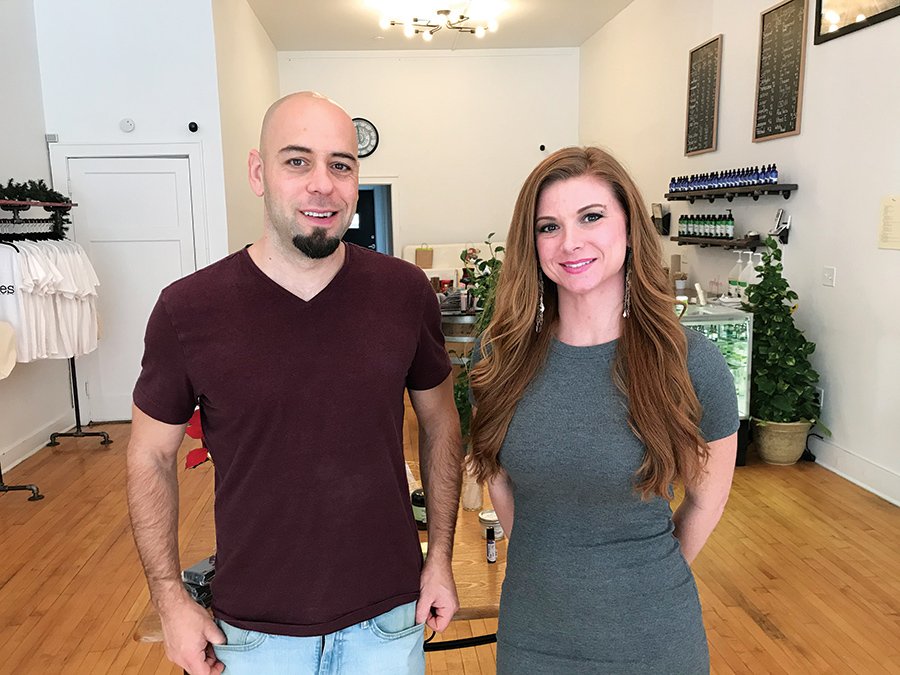 Several circumstances converged to lead Matt and Shawna Falk to form Good Vibes Oil, (1500 Underwood Ave., Wauwatosa), a holistic living store specializing in cannabidiol products. The couple began exploring the cannabis industry five years ago while living in Michigan, when they were investors in that state’s medical cannabis market.

Shawna had also experienced health problems after giving birth to the couple’s second daughter. Having grown up in a household where her mother used holistic remedies, Shawna researched her ailments and found the common denominator was inflammation. “Cannabidiol (CBD) was the strongest anti-inflammatory agent I could find, and after taking it, I felt better,” she says.

The couple had lived in California for a year while Matt worked in the tech industry, and Shawna was a personal trainer. Matt grew tired of his field, and the couple eventually returned to their home state of Wisconsin to find an emerging hemp industry. With that, they saw an opportunity to merge Shawna’s interest in holistic wellness with a growing market. They formed Good Vibes Oil this past January. In October, they opened a retail space in The Village of Wauwatosa.

Good Vibes Oil has a boutique ambiance with repurposed furniture and shelving, which ties into their sustainability goals. They also wanted to avoid mistakes they saw in the CBD industry. “We didn’t go into this telling people that CBD cures everything, because it does not cure everything! It helps with inflammation,” Shawna emphasizes. “I think there’s a lot of misinformation out there.”

Matt also points out that a lot of people are curious about CBD but might be intimidated by a head shop ambiance or by information overload. Good Vibes just carries their own product line formulated for three specific uses: “calm,” “soothe” and “alive.” Good Vibes Calm, one of their popular CBD formulas, is available in capsule or tincture form and has melatonin, valerian root and a blend of terpenes including delta 3 carene to naturally promote sleep. Their Elite line is broad spectrum, which contains terpenes, cannabinoids, flavonoids and fatty acids found in hemp, but without tetrahydrocannabinol (THC).

Matt adds that Good Vibes products are made in a Food and Drug Administration (FDA) registered facility. “Cannabidiol has not passed any kind of FDA clearance at all, but there are food grade FDA facilities where our products are put together,” he says. Their products are also third-party tested.

In addition to CBD tinctures and capsules, they also carry body butter, lotion, gummies, pet treats and pain cream. Also popular is the custom oil blends bar, which features Shawna’s ready-made concoctions, or blends and sprays she can make on the spot, with or without CBD. The store will host a yoga class Saturday, Dec. 14, and Shawna plans to add more wellness offerings.

The Falks source some CBD from their own cannabis grown by Earl Humphrey on a farm in Delavan, Wis. They experimented with growing seeds and plants, and after a successful first crop, they’re ready to scale up. “This is an industry that was created by outlaws who grew plants in their closets or in a park, so there wasn’t a lot of good, consistent growing data out there,” Matt explains.

Because Wisconsin is behind the curve compared to cannabis markets in other states, if and when the state finally legalizes all cannabis, Matt notes there’s a possibility that large out-of-state companies could swoop in, leaving Wisconsin farmers behind. But he has ideas to avoid that scenario:

“With the cannabis industry still being federally illegal, states can make their own rules. If Wisconsin legalizes it, we can require it to be only Wisconsin grown, or we could pass legislation for fair wages in the industry. This is an untouched market where we could make all the rules. With the beating farmers have taken in Wisconsin, we should take advantage of this once-in-a-lifetime boom to make farming a staple in Wisconsin again.”