Get a load of this joint.

Interested in some hemp gummy sweets? A skin cream made with CBD and natural ingredients? What about cookies made with CBD? Or how about a few CBD drops added to your cappuccino?

A new café in Lion’s River is leading the trend in the Midlands for selling products with cannabidiol (CBD), an oil synthesised from dagga plants.

The VT Coffee Café, on the sleepy R103 road not far from the Nelson Mandela Capture Site, is selling everything from CBD oil drops to energy drinks with CBD, and locals are loving it.

The Café was opened in December last year, following the landmark ruling handed down that decriminalised the private use of dagga.

The coffee shop is housed in a shipping container and has a deck above it where people can relax and use dagga.

It was built by owner Rob Forsyth, who owns the café with his wife Skye, who is a lawyer. The store is registered with the Cannabis Development Council of SA, which is involved in drafting new legislation around dagga and which may decriminalise it being sold.

“My family is in the hospitality industry and we were looking at the option of opening a coffee shop, but we wanted to open a unique one,” Skye told Weekend Witness. “We wanted to build one to give people an experience.”

She said her family opened the first VT Coffee Café on the South Coast last year, and the Lion’s River branch was opened soon after. “Just like how the craft beer craze came in, we were talking about doing something along those lines. Dagga may be legalised soon and we want to be at the forefront of that.”

Skye said their CBD products are supplied by Durban companies which work closely with medical professionals to ensure that the products have legal amounts of CBD and low amounts of tetrahydrocannabinol (THC) — the chemical that gets a person high.

This also, she said, ensures the chemical composition of each bottle of CBD oil is consistent. “It’s not like we’re getting it from some person just cooking it in their kitchen,” she said.

She said customers often ask whether they sell dagga. “We toe the line as far as the law is concerned. So we don’t sell.

“We do allow people to smoke on our deck upstairs, but it isn’t a free-for-all. We make sure people behave and there are no under-18s, and so on. We are not about back-alley selling and we want to do it properly.”

Rob said dagga and its use is still a taboo. “People shouldn’t be made to feel like criminals for using it, or products with CBD in them. When people visit the café they often ask us what CBD is and what it does, and we’re happy to educate people.”

He added that there is anecdotal evidence that has shown that CBD, and other forms of natural medicine, have a positive effect on people’s health. “Sometimes people don’t want to change their thinking about medication,” he said.

Both said they would like to see dagga and CBD regulated in the way alcohol is: by greater standardising and licensing of the products.

So, just how potent are CBD products?

“You won’t get high because there are very small amounts of THC in legal products,” Skye said. “So, say, when you have a coffee with CBD in it you may feel calmer and maybe not get that ‘coffee anxiety’.” 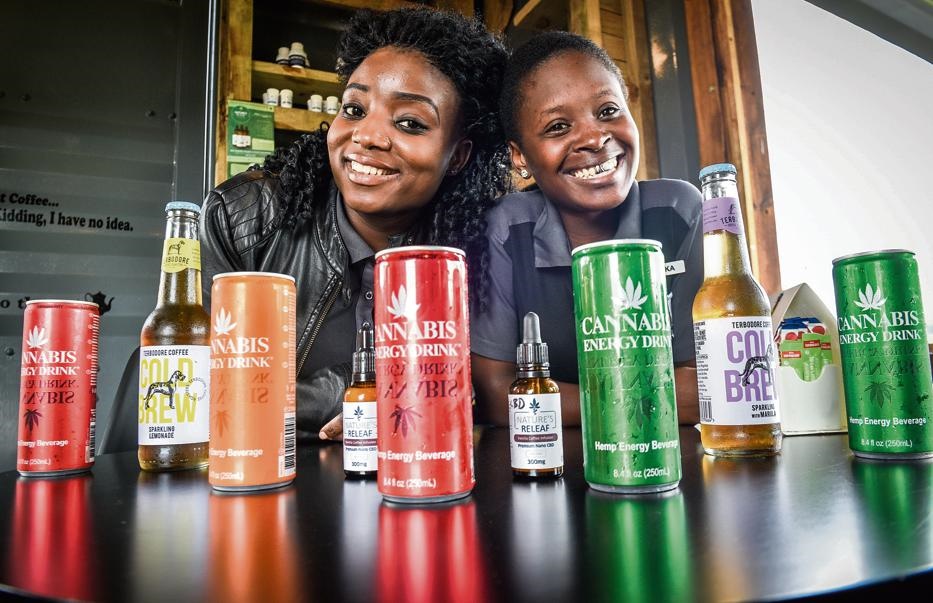 The Forsyths said that so far, a top seller has been their pet-friendly CBD drops. “This was a top seller around the festive season when people were using fireworks,” Rob said. “It just calms the dog down, it doesn’t make them high or make them sleep.”

Skye added that the drops also help dogs in pain, like those with severe arthritis.

Other top sellers are a skin balm with CBD which makes skin smoother, and the 20 milligram CBD oil, which is the highest legal dosage a person can sell. “Anything more than that will make it a schedule four drug and you’d need a prescription to buy it,” Skye said.

Ironically, the couple themselves do not use dagga. “I’ve never had a problem with it but I’ve never really used it, probably because of my asthma,” Rob joked.

Skye noted that there may be more stores opening in Ballito and Durban later this year. “But those may not be made in a shipping container,” she said.

At the end of the day, the most important thing for the couple is that the customers are satisfied with the overall experience and the coffee.

“If the coffee is not good at a coffee shop, then what’s the point?” Rob quipped.