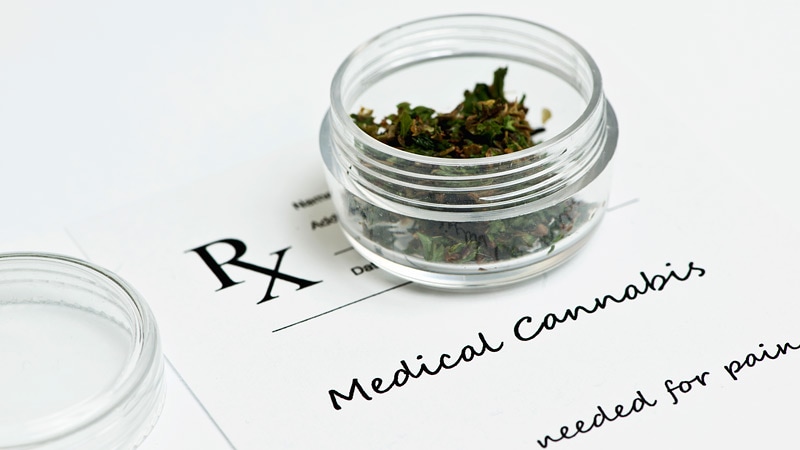 Even as two states have passed laws to encourage clinicians to use cannabis as a substitute for opioids, some experts are warning against this practice.

Saitz, who is also a former director of Boston Medical Center's Clinical Addiction Research and Education Unit, said he and Humphreys decided to write the article, which was published online February 1 in JAMA, because patients and physicians have been “chattering” about cannabis as an opioid substitute.

“The conversation has generally assumed cannabis to be safer and as effective as opioids, but it isn't clear what the truth is,” Saitz told Medscape Medical News.

Both New York and Illinois recently amended medical marijuana laws in favor of cannabis as a substitute, which was another factor in writing the article, said Saitz.

New York issued emergency regulations in July 2018 allowing opioid users to become certified to use medical marijuana instead. In August 2018, the Illinois governor signed a bill allowing individuals over age 21 with conditions for which opioids might be used to apply for the medical marijuana program.

“The suggestion that patients should self-substitute a drug (ie, cannabis) that has not been subjected to a single clinical trial for opioid addiction is irresponsible and should be reconsidered,” Saitz and Humphreys write.

“There are no randomized clinical trials of substituting cannabis for opioids in patients taking or misusing opioids for treatment of pain, or in patients with opioid addiction treated with methadone or buprenorphine,” they add.

There is “low-strength” evidence showing that cannabis can alleviate neuropathic pain, and insufficient evidence for other types of pain, and the studies are of poor quality, said the authors.

Saitz and Humphreys noted that some have said that allowing cannabis use instead of opioids has led to fewer overdoses. But, they said, “correlation is not causation.”

The only individual-level study to look at this issue, published in the Journal of Addiction Medicine in 2018, found that “medical cannabis use was positively associated with greater use and misuse of prescription opioids,” they said. A regression model study published last fall in the American Journal of Psychiatry reached a similar conclusion: that cannabis use increased the risk of developing nonmedical prescription opioid use and opioid use disorder.

Saitz and Humphreys said proponents of substitution often overlook the risks of cannabis, which include motor vehicle crashes, cognitive impairment, structural brain changes, and psychotic symptoms. There is also a risk of cannabis addiction, they said.

The authors said that if cannabis is to be used as medicine, it should be subjected to the same types of trials and regulation as medical therapies.

“Cannabis and cannabis-derived medications merit further research, and such scientific work will likely yield useful results,” they said. “This does not mean that medical cannabis recommendations should be made without the evidence base demanded for other treatments,” they write.

Asokumar Buvanendran, MD, chair of the American Society of Anesthesiology's (ASA's) Committee on Pain Medicine and a professor of anesthesiology at Rush University Medical Center, Chicago, Illinois, agreed that “there is not enough research and science” on cannabis, but added, “we need to support further research.”

Even though he practices in Illinois, he said that he does not believe awareness of the changes to the state's medical marijuana law is widely known.

Buvanendran said he'd counsel patients seeking to substitute cannabis to consider alternatives — such as injection therapies and surgical procedures to modulate nerves causing pain — which have a larger evidence base.

Kevin Boehnke, PhD, a research investigator in the anesthesiology department and Chronic Pain and Fatigue Research Center at the University of Michigan, Ann Arbor, who has written a lot on cannabis and chronic pain, told Medscape Medical News that most cannabis trials have methodological flaws and “the evidence for opioids for chronic pain management is quite poor.”

He also notes that the studies generally do not distinguish between tetrahydrocannabinol (THC), which is psychoactive, and cannabidiol (CBD), the other most prevalent active ingredient. THC is associated with most of the health risk of cannabis, while CBD products have limited abuse potential, Boehnke said.

Boehnke believes cannabis offers less dangerous side effects and a lower risk of addiction — although he would advise against use in people with substance use disorders. Both opioids and cannabis are relatively ineffective pain relievers, “but one of them can kill you and one can't,” said Boehnke, adding, “to me, the risk-benefit is obvious.”

He added that he is looking forward to a time when there is better evidence to guide clinicians, particularly given that he and his colleagues recently published data suggesting that potentially more than a million Americans are using medical marijuana.

In that study, published in the February edition of Health Affairs, the researchers queried states with medical marijuana laws in an attempt to gauge how many Americans have registered and what conditions they were treating with cannabis.

Data were available from 20 states and Washington, DC; Connecticut does not publish reports on users and did not respond to requests for data and 12 states said they don't have statistics.

Chronic pain was the most common patient-reported condition, accounting for 62% of the total conditions reported, followed by multiple sclerosis spasticity. Those are also the two conditions with the largest evidence base and among the most common conditions required for medical marijuana certification in most states, Boehnke told Medscape Medical News.

And chronic pain affects some 100 million Americans, so it is no surprise that it is the most common condition that individuals are seeking to treat, he said.

The gap in statistics on the number of users and conditions they are treating highlights “the importance of compiling a nationwide database of medical cannabis users to evaluate the risks and benefits of using medical cannabis for different medical conditions and symptoms,” said the authors.