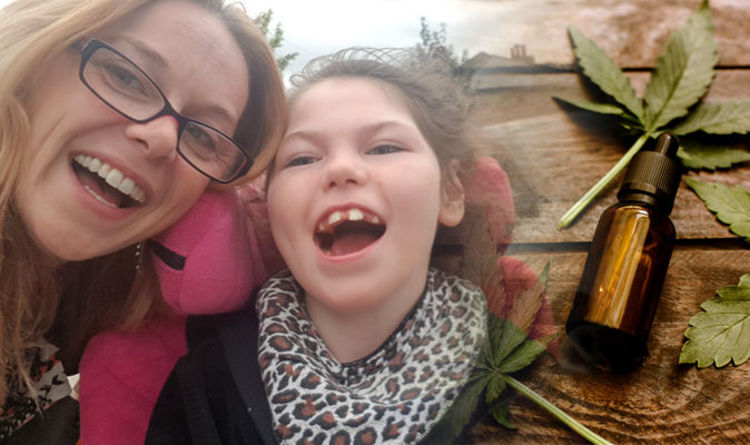 CBD oil has gained traction in the health and wellbeing world after popping up in high street shops at the end of the last year.

Also known as cannabidiol, CBD is one of the 80 plus active cannabinoids naturally found in the cannabis or hemp plant which is legal, unlike THC which is illegal and gives people a ‘high’.

As the cannabis industry has developed, more studies have been conducted showing the potential use of CBD oil for medicinal purposes.

Among its benefits, CBD has been reported to help relieve arthritis pain and assist a good night’s sleep. Now one mum, whose daughter was born with cerebral palsy, says CBD oil has massively improved her daughter’s quality of life, and now wants others to follow suit.

Ange Hudd, 38, is mother to two children, one of whom is Lilly Morgan, aged nine.

Lilly was born with lots of different conditions, which include quadriplegic cerebral palsy, epilepsy and reflux.

Since she was born, and after being told she would never walk, Lilly has been taking a range of different medications, many of which are sedatives.

But in a bid to look for alternatives to these medications, and to improve her daughter’s life, Ange discovered CBD oil.

She told: “A friend of mine mentioned CBD to me and looked at him blankly. I said ‘what on earth are you talking about?’ I knew about cannabis but not about the CBD side of it. I then went home and did a lot of research around it and watched documentaries online. “

“Her fists are usually really clenched, and this has just really opened up her hands.

“She was having a lot of tonic-clonic seizures [a type of epileptic seizure]. She hasn’t had one for a long time now.

“At her school and at the charity group she goes to every other Saturday they’ve noticed her absence seizures [which causes you to blank out or stare into space for a few seconds] are pretty much gone.”

Lilly has been taking CBD oil orally for two months now and Ange says it’s made a “massive difference”.

“There are side effects for a lot of the medicines Lily takes, and Lily pretty much gets more side effects. Natural products seem to work a lot better with children like Lilly,” she added.

Towards the end of November Ange is taking Lilly to see a a neurologist, and hopes to discuss the positive impact CBD oil has had on her daughter’s condition.

In the meantime, Ange has been raising awareness about CBD on social media.

After posting about CBD online, another mum approached Ange saying she wanted her daughter, who’s autistic and has a benign brain tumour, to try CBD.

“Two months later this little girl is now stringing sentences together,” said Ange. “She’s never spoken full sentences like that before, she’s winning awards at school, she’s just taken part in an assembly for the first time ever.

“Three months ago she could barely string sentences together, she was having meltdowns, she was wetting the bed. She doesn’t wet the bed anymore.

“I cry every time her mum sends me a video. I just cry with joy.”

Looking towards the future using CBD, Ange says her biggest dream is for Lilly to be able to us a computer, similar to an Eye Gaze.

“By the time she’s 13 I want her to be able to tell me she loves me, that she knows that I love her and that I’m trying to do everything I can for her. She’s my daughter and she deserves the best life,” she added.

“I’m not naive, I know Lilly isn’t going to be a ballerina, but I believe when she gets a bit older she might be able to do two steps.”

According to Dr Andrew Thornber, chief medical officer at Now Patient, there has been lots of research suggesting that CBD may be of benefit in controlling some of the main symptoms of cerebral palsy.

He said: “Research on medical marijuana and cerebral palsy is still limited, but findings from studies suggest that it offers a host of benefits, including pain control, reduction of spastic movements, seizures reduction, and more.

“I would always recommend anyone wanting to take any medicine that isn't registered with the General Pharmaceutical Council to do so with caution and almost always have a chat with your Pharmacist or GP at your next visit to take their advice.”

Medicinal cannabis products were made available on prescription in the UK yesterday.