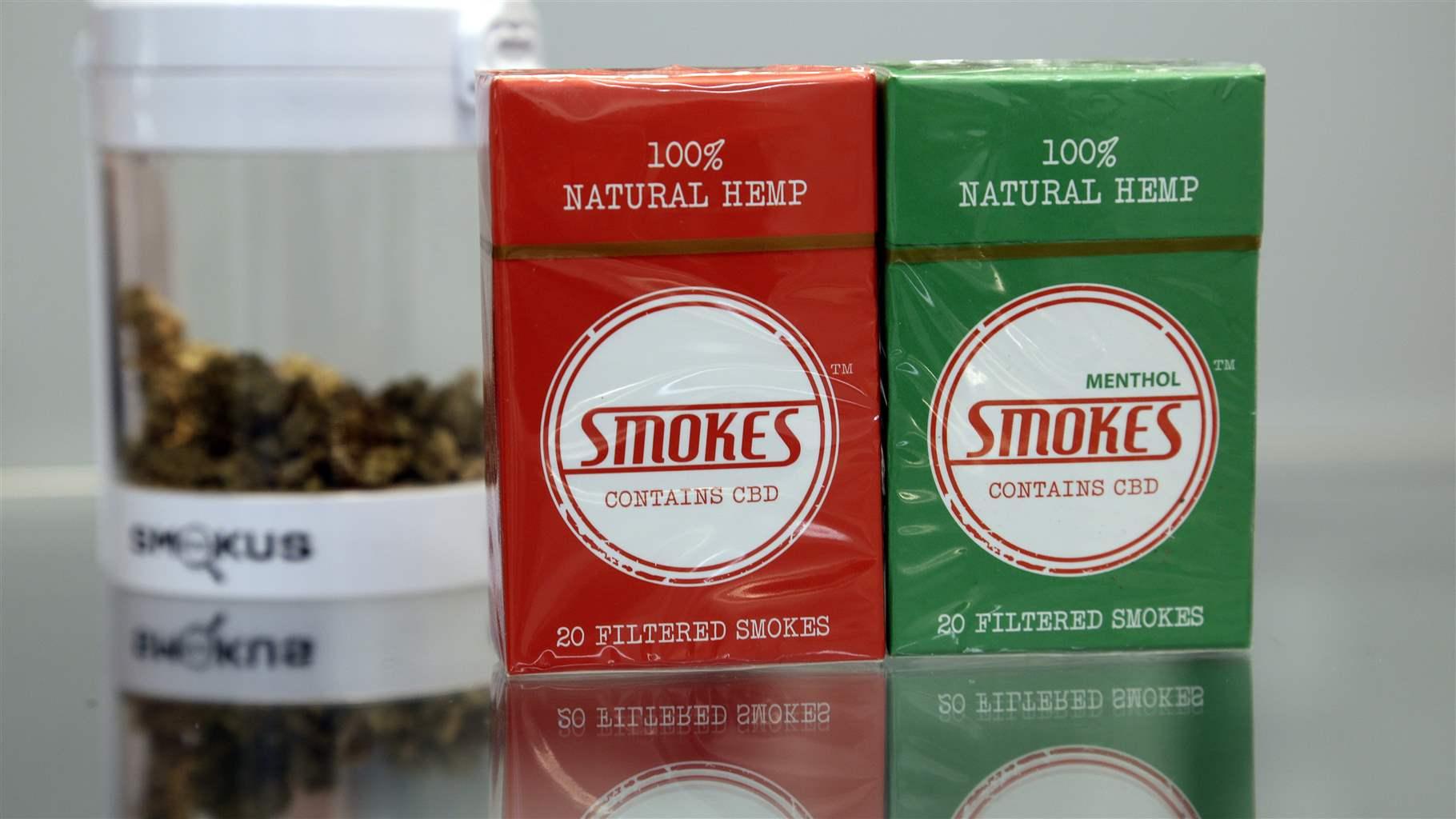 Hemp plants can be made into anything from rope and insulation to granola. But today, most U.S. hemp farmers are growing hemp to produce cannabinoids, such as CBD — which means they’re growing plants that look like marijuana, smell like marijuana and, increasingly, are rolled into joints and smoked like marijuana.

Now some state lawmakers, alarmed by how difficult it is for law enforcement officers to tell the difference between hemp bud or joints and illegal pot products, are cracking down on smokable hemp.

Louisiana and Indiana banned smokable hemp sales in 2019, and Texas banned smokable hemp manufacturing. Kentucky banned sales of hemp cigarettes, cigars, whole hemp buds and ground flowers in 2018. And a battle over whether to allow sales of dried hemp flower, pre-rolled hemp joints, hemp cigarettes and other smokable products has stalled a North Carolina bill that would regulate hemp production and sales in the state.

“My philosophy right now is, we are actually legalizing recreational marijuana if we don’t listen to our law enforcement and do something about this,” said North Carolina state Rep. Pat McElraft, a Republican and deputy House majority whip.

The rise of hemp products so similar to marijuana has caught some lawmakers by surprise. Nobody talked about smoking hemp or said police couldn’t tell the difference between hemp and marijuana when North Carolina created a hemp pilot program in 2015, McElraft said.

Farmers and hemp businesses are fighting the bans, arguing that they violate federal law and hurt a nascent industry. The 2018 farm bill legalized hemp sales and defined hemp as any part of Cannabis sativa L. with a tetrahydrocannabinol, or THC, concentration of 0.3% or lower.

“The bill Indiana ended up passing was like essentially telling a cattle farmer, ‘Hey, you can sell beef, but you can’t sell steak.'”

“If the North Carolina legislature wants to waste its time attempting to ban a smokable hemp — OK,” said Bob Crumley, founder and CEO of North Carolina-based hemp company Founder’s Hemp and a lawyer who has advised policymakers on hemp issues. “It’s not going to survive a court challenge.”

Besides, the market for smokable flower — the most pristine, cannabinoid-rich plants — is the most lucrative many hemp farmers, retailers and distributors can access.

“The bill Indiana ended up passing was like essentially telling a cattle farmer, ‘Hey, you can sell beef, but you can’t sell steak,’” he said.

By contrast, an estimated $70.6 million of hemp CBD pre-roll and raw flower were sold in the United States in 2019, Lee said. But, she said, those sales are growing.

People buying smokable products aren’t the stoner set associated with weed, Crumley said. “This product, smokable hemp, in my stores is being used by everyone from soccer moms, who want to have anxiety or stress release but not get high, to cancer patients,” he said.

Some consumers prefer to smoke hemp flower rather than ingest hemp oil because smoking delivers cannabinoids straight to the bloodstream, Swanson of the Midwest Hemp Council said. Others smoke because they don't have to worry about toxic additives or mislabeling with dried buds.

“I’ve had a lot of people tell me they’re a lot more comfortable using this way,” he said.

CBD May Be Natural, But Is It Safe?

Yet smokable products make some policymakers wary. Concerns about the health dangers of smoking and vaping CBD, along with fears that hemp could, in fact, be psychoactive, play a role in lawmakers’ decisions to ban smokable products, said Jonathan Miller, general counsel for the U.S. Hemp Roundtable, a Lexington, Kentucky-based industry group.

“There’s some concern that hemp pre-rolls are Woodstock-era marijuana — what marijuana used to be 30, 40 years ago,” he said. A level of about 1% THC is considered the threshold for cannabis to have a psychotropic effect, according to the nonpartisan Congressional Research Service.

But pushback against the sale of smokable hemp products from police departments, state law enforcement agencies and district attorneys has dominated the debate in states such as North Carolina.

“It’s a flowering product that looks like marijuana, smells like marijuana, and unless you go to a specific lab for testing, you can’t tell the difference,” said Peg Dorer, director of the North Carolina Conference of District Attorneys.

The North Carolina state crime lab doesn’t have testing equipment sensitive enough to gauge the amount of THC in a cannabis sample, Dorer said. “In order to test it, they would need to send it to a private lab, and that is expensive, and we don’t have the budget for that kind of thing.”

Law enforcement officers in the state worry that the proliferation of smokable hemp will make it impossible for them to search a person or property for marijuana based on the smell of weed, said Roxboro Police Department Chief David Hess, first vice president of the North Carolina Association of Chiefs of Police.

The current version of the North Carolina Farm Act, to be taken up by lawmakers again this year, defines smokable hemp as “harvested raw or dried hemp plant material, including hemp buds or hemp flowers, hemp cigars, and hemp cigarettes” and classifies it as a form of marijuana.

The legislation does allow licensed hemp producers to grow and process smokable hemp, as long as they don’t sell it within state borders. “You could still sell it outside of North Carolina,” Dorer said. “That was our compromise.”

Republican state Sen. Brent Jackson, a farmer, said in an email to Stateline that he remains hopeful lawmakers will sign off on his bill that would allow smokable hemp sales. “The Federal Farm Bill of 2018 made it very clear that all hemp shall be legal,” he said, “and it is my intention to support the hemp growers, processors, and retailers as they move this new industry forward.”

“We don’t want to start our state program with a ban in place on any part of the plant that’s compliant,” said Blake Butler, executive director of the North Carolina Industrial Hemp Association. “Even though it’s being smoked, it’s still an agricultural commodity.”

Butler’s looking to Indiana, where last fall the Midwest Hemp Council and seven hemp businesses won a preliminary injunction against a 2019 Indiana law that defined “smokable hemp” as hemp products that allow THC “to be introduced into the human body by inhalation of smoke” and made manufacturing, delivering or selling smokable products a misdemeanor.

In their suit against the state, the hemp businesses argued that the law’s smokable hemp provisions violate the 2018 farm bill and would seriously harm them and their businesses. The state Attorney General’s office argued that Indiana’s law complies with the farm bill and protects the public.

“Permitting smokable hemp to be produced or possessed in Indiana would present significant obstacles to the ability of law enforcement to enforce Indiana’s laws against marijuana,” it argued.

U.S. District Senior Judge Sarah Evans Barker of the Southern District of Indiana sided with the hemp industry. “The fact that local law enforcement may need to adjust tactics and training in response to changes in federal law is not a sufficient basis for enacting unconstitutional legislation,” she ruled in September.

The Indiana Attorney General’s office is appealing the decision.

Although the court fight is far from over, the Barker ruling should give lawmakers pause, said Rod Kight, a cannabis attorney based in Asheville, North Carolina. “I think it’s a very strong signal to state legislatures that they can’t get in the way of hemp that’s now federally legal,” he said. “They can’t stop a whole piece of the hemp industry from going into effect and thriving.”

But he’s hopeful that hemp businesses and law enforcement groups can team up to solve the problem of policing smokable products. “We respect law enforcement,” Butler said, “and we need to work together.”

A proposed bill in Tennessee could be one way to neutralize police opposition, he said. It would extend the 6.6% excise tax on smokeless tobacco products to hemp products people either smoke or consume like snuff and chewing tobacco.

Money raised by the tax could help law enforcement groups buy roadside THC testing equipment and fund other hemp industry priorities such as research and development, said Joe Kirkpatrick, president and chief lobbyist of the Tennessee Growers Coalition, a hemp advocacy group based in Nashville.

A 2019 Tennessee law prohibits the sale of smokable hemp products to minors. Kirkpatrick said lawmakers’ approach to regulating such products has been influenced by their desire to help farmers, particularly tobacco farmers grappling with falling sales.

“Farmers really need an alternative specialty crop,” Kirkpatrick said. Smokable hemp, he said, isn’t known to be carcinogenic or addictive and might just be the next tobacco. “It would be much better than the vape poisons that [tobacco companies are] pushing on the youth,” he said of hemp.