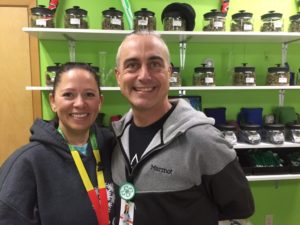 Alaska is poised to become the first state to regulate cannabis cafes. The state’s Marijuana Control Board is now accepting applications for on-site consumption. That’s despite uncertainty stemming from recent board appointees by Governor Mike Dunleavy’s administration. Nevertheless, one pot shop in Haines is already prepping to open the first marijuana lounge in town.

Jason Adams is using tweezers to select fuzzy green marijuana buds from an oversized glass jar. It’s for a customer stopping into Wintergreens, his state-licensed marijuana store in Haines.

This place feels like the cross between a cell phone store and a college dorm room. It’s spartan and clean with bright green walls and glass cases displaying product and all manner of smoking apparatus.

Adams is an owner calls himself a budtender, like a bartender serving alcoholic cocktails — except his patrons can’t imbibe here.

Adams ran the idea of a cannabis lounge by one of his customers.

“I’d be in here everyday after work!” the man said with a laugh.

That could soon be possible. This month marks the first time businesses can begin the process of applying for on-site consumption licenses. The Alcohol and Marijuana Control Office hasn’t received any applications yet, as the first step is posting a notice for three weeks before filing papers.

This shop is one of the first buildings that cruise ship passengers see when they step off the dock in Haines.

“We have such a variety of customers that come in. Not just locally. But a variety of all over Alaska and all over the whole world,” Adams said.

“We should have a spot within a year,” said Adams. “And then when everyone asks ‘Where do we use this?’ when they come in to our shop, then we’ll be able to say, ‘Right over there.’”

But there’s still some uncertainty over whether it’ll happen. That’s because Gov. Mike Dunleavy’s appointment to the Marijuana Control Board says he’s skeptical about pot cafes.

The legislature has confirmed the appointment of Alaska Wildlife Trooper Lt. Christopher Jaime. He’s indicated he’d like the board to take another look at allowing cannabis cafes. The governor’s other appointee Vivian Stiver of Fairbanks had a history of campaigning against commercial cannabis; lawmakers didn’t confirm her and it’s unclear who the governor will appoint in her place.

Because the marijuana control board passed on-site consumption regulations by a narrow 3-2 vote, any new member could be a crucial swing vote that could overturn the previous board’s action. Even so, Adams says he’s optimistic. He feels like history is on his side.

“When I was young, it was the war on drugs and Nancy Reagan was leading “just say no” and everyone from my grandparents to my parents believed cannabis to be something that was bad and negative,” he smiles.

“Now, I work with my father in the cannabis industry… So the community I believe has decriminalized it in their minds.”

Businesses hoping to host on-site consumption will need to submit detailed plans, keep a separate area from the retail shop and secure approval from local authorities. The model is similar to a liquor license, but possibly more strict.

It’s still unclear how to reconcile on-site cannabis consumption with a statewide indoor smoking ban. There are edibles, but the most popular form is smoking or vaping.

The Haines Chamber of Commerce hasn’t taken a position over public consumption of marijuana, but Wintergreens is a chamber member. Chamber Director Tracey Harmon says the chamber recognizes pot shops are part of the business community.

“I would say the Chamber kind of prides [it]self on [its] diverse membership. I think we’d be in support of industries that bring in more to grow and develop our economy.”

“Mean not having to partake by myself all the time!” he said with a laugh.

Adams rings up several more customers. CBD oil, cones for rolling, and pre-rolled joints. To go. But if his application makes it through, his customers could have the option to settle into a comfortable chair and stay awhile.